An outstanding separator system for the biotech and pharmaceutical industries. The Alfa Laval BTPX range bridges the gap between laboratory and commercial production. 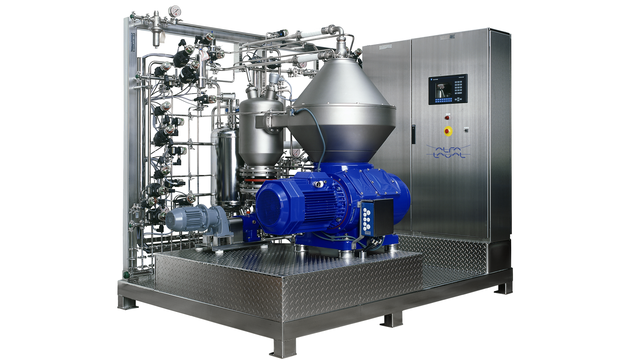 The BTPX is delivered as a fully automatic, plug-in, separation system and can deliver the performance of production machines from pilot to medium scale production.

The BTPX separation system is steam sterilizable and has cleaning-in-place capability. A specially designed seal system provides efficient containment and eliminates the risk of product or environmental contamination.

Cooling jackets surrounding the BTPX centrifuge bowl give efficient temperature control and also contribute to a low noise level. The “dosing ring” solids-ejecting system with fast and distinct discharge action ensures low product losses and drier solids. Flushing nozzles spray the outside of the centrifuge bowl and the inside of the frame hood for maximum hygiene. 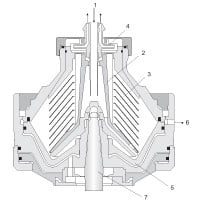 The feed is introduced to the rotating centrifuge bowl (fig 1) from the top via a stationary inlet pipe (1), and is accelerated in a distributor (2) before entering the disc stack (3). It is between the discs that the separation of the liquid phase and the solids phase takes place. The liquid phase moves towards the centre of the bowl from where it is pumped out under pressure by means of a built-in paring disc (4).

The heavier solids phase is collected at the bowl periphery, from where it is discharged intermittently via the centrifuge cyclone. The solids discharge is achieved by a hydraulic system below the separation space in the bowl, which at preset intervals forces the sliding bowl bottom (5) to drop down, thus opening the solids ports (6) at the bowl periphery. The bowl is mounted on a vertical spindle (7) driven by a horizontally mounted motor, via a worm gear.