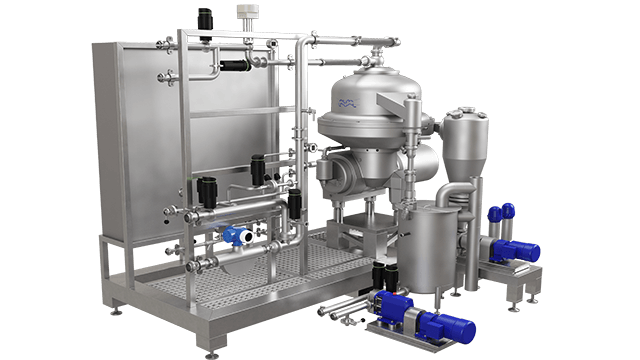 Key features of the AFPX range of centrifuges are their ability to handle high flow rates, high solids content and high-temperature processing. These functions make it the ideal choice to handle the tough conditions encountered in the animal and fish processing industries.

The AFPX was designed to discharge solids intermittently, while at the same time separating two intermixed and mutually insoluble liquid phases of different densities. The centrifuges comes in a series of optimized executions that  are suitable for a considerable number of duties, including  separating fish press water, stick water and extracts. Other applications include the purification of fish oil and liver oil, animal fat, peel oil, and similar products.

Typical bowl drawing for a solids-ejecting centrifuge. Drawing details do not necessarily correspond to the centrifuge described

Separation takes place inside a rotating bowl. The feed is introduced to the rotating centrifuge bowl from the top via a stationary inlet pipe (1), and is accelerated in the distributor (2), before entering the disc stack (3). The distributor is designed especially to ensure smooth acceleration of the feed liquid (4).

The separation of liquid-liquid-solids takes place between the discs, with the oil phase moving through the disc stack to the centre and is discharged through pipes (5) and sprayed out into the collecting frame. The water and solids separated from the oil moves out to the periphery, the water is led via channels in the top disc (6) to the paring chamber, where it is pumped out of the rotor with means of a built-in paring disc (7).

The solids are collected in the periphery, from where it is discharged intermittently via the centrifuge cyclone. The solids discharge is achieved by a hydraulic system which at preset suitable intervals forces the sliding bowl bottom (8) to drop down and thus opening the solids ports at the bowl periphery.